Four years on from the landmark Supreme Court ruling that allowed the introduction of minimum unit pricing of alcohol in Scotland, 28 organisations from Scotland and beyond have supported calls from Alcohol Focus Scotland (AFS) and Scottish Health Action on Alcohol Problems (SHAAP) to increase the minimum unit price in an effort to save more lives from alcohol.

In the letter to Scotland’s Cabinet Secretary for Health, Humza Yousaf MSP and Public Health Minister, Maree Todd MSP, the campaigners recommend the Scottish Government increases the current price of 50 pence per unit to 65p.

Signed by leading health and children’s charities and Royal Colleges, the letter highlights that while the initial findings from the Public Health Scotland evaluation have been positive, the impact of a 50p MUP is likely to have been significantly eroded by inflation since it was approved by the Scottish Parliament 9 years ago. This coupled with the effects of the pandemic has stalled Scotland’s progress on tackling alcohol harm.

Minimum unit pricing was introduced in 2018 and in the two years following there was a reduction in alcohol consumption and decreases in hospital admissions from alcohol-related liver conditions. Scotland also saw a 10% decrease in the number of alcohol-specific deaths in 2019. Unfortunately, probably due to changing drinking patterns during the pandemic, deaths rose by a devastating 17% in 2020.

The campaigners emphasise that Scottish Government could save and improve more lives by increasing the minimum price. The original modelling of MUP calculated that setting a higher price will deliver greater benefits – a price of 60p per unit was predicted to save twice as many lives and hospital admissions as 50p per unit, while 70p was expected to deliver three times the effect.

Alison Douglas, chief executive of Alcohol Focus Scotland said, “We’ve seen that minimum unit pricing can have a positive effect. Unfortunately, inflation means we’re not seeing the full benefits of this life-saving policy. We need to off-set both the effects of inflation and of the pandemic, and adjust the minimum unit price to a level that will save more lives and prevent a new generation from developing an unhealthy relationship with alcohol. We urge the Scottish Government to take action now and raise the minimum unit price to at least 65p.”

Dr Alastair MacGilchrist, Chair of SHAAP, said, “The Scottish Government committed to review the price two years after the introduction of the policy. While this has understandably been delayed due to the pandemic, we cannot afford to wait any longer. This support from a wide range of organisations shows that experts in public health and beyond believe increasing the minimum unit price is the right thing to do. By taking action the Scottish Government can reduce the harm and pain caused by alcohol problems across Scotland as well as save many more lives.” 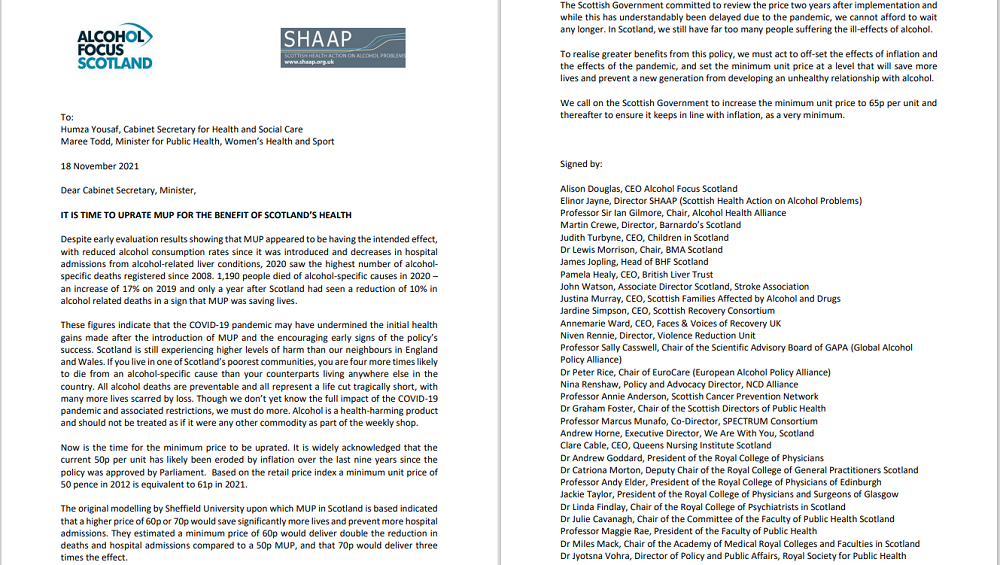