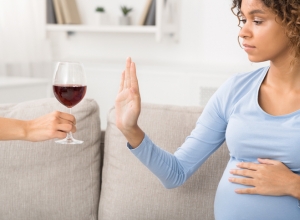 Fetal Alcohol Spectrum Disorder (FASD) results from alcohol exposure during pregnancy, and is thought to be the most common neurodevelopmental condition in Scotland. FASD affects both physical and mental health and can significantly reduce life expectancy. Here, Dr Lisa Schölin from the UK FASD Research Collaboration discusses FASD in the UK with a focus on the Scottish context, including recent research and developments.

In 2019, a group of 14 researchers met at University of Salford to present and discuss current work on FASD in the UK. The aim – to form a foundation and grow a research collaboration of UK researchers working in areas related to FASD. In 2020, a second meeting was held and by this time our list of participants had at least doubled. Alongside the researchers, there were enthusiastic contributions from families affected by FASD. The growing interest in this area comes on the backdrop of recent progress in raised awareness, policy developments and coordinated activities in Scotland and across the UK.

It is almost fifty years since the first studies describing the dysmorphology of children who were exposed to alcohol during pregnancy, named Fetal Alcohol Syndrome (FAS), were published and laid the foundation for our knowledge around risks associated with prenatal alcohol use.

Over time, researchers and clinicians have recognised a broader spectrum of effects from prenatal alcohol, covered under the umbrella term FASD, which is believed to be the most common, preventable neurodevelopmental condition. It impacts aspects such as behaviour, memory, physical health and emotional regulation. These effects are wide ranging, and create a need for additional support and resources for affected individuals. The international consensus is that the condition is likely to be under-diagnosed, or misdiagnosed, and consequently many individuals are not getting the support they need.

As FASD has historically been, and still is, under-recognised; awareness raising is needed across health, social care and education sectors. Many of the members of the aforementioned UK research collaborative have been striving to do this, and recently published a paper in the British Medical Journal’s Archives of Disease in Childhood outlining progress in this area. However, there are still a lot of gaps in funding of research, commissioning of specialised neurodevelopmental services, and accredited sources of learning in FASD to develop awareness and skills to aid identification of affected individuals. Collectively, these factors act to hinder awareness relative to other common neurodevelopmental disorders, such as autism spectrum disorders (ASD) and attention deficit hyperactivity disorder (ADHD).

Is this a problem in Scotland?

Globally, it is estimated that 10% of pregnant women drink alcohol at some point during their pregnancy. In the UK, this number is estimated to be 41%. Countries with higher levels of alcohol consumption, overall, will tend to have higher levels of alcohol use during pregnancy. Data from Scotland, based on retrospective self-reports, show that around half of women consumed alcohol in the time period before they found out they were pregnant – with most consuming alcohol infrequently. When asked about alcohol use after finding out about the pregnancy, 88% responded they had not consumed alcohol. Among those who did, the majority reported drinking monthly or less than monthly. Other research has found higher levels of alcohol use. A study which measured alcohol biomarkers in meconium (baby’s first stool) from new-borns of 235 women who gave birth in one hospital in Glasgow found that 40% of samples indicated alcohol had been consumed. In 15% of samples, the levels of biomarkers detected was indicative of significant levels of alcohol being consumed in the pregnancy.  It is worthwhile noting that meconium is only made in babies from the second trimester so the true rate of alcohol exposure in pregnancy in this group may be higher than 40%.

So, how many individuals in Scotland have FASD? The short answer is that we don’t know. To establish an accurate estimate, studies require a lot of time, resources and individuals to assess whether they have FASD. Estimated prevalence from a global study, which modelled prevalence based on drinking patterns and estimated prevalence of alcohol use during pregnancy, for the UK as a whole is 32.4 per 1000. In 2015, Scotland’s first FASD specialist clinic was launched and within four months was found to be at full capacity. Indeed, the lesson learned from this service evaluation was that the high demand for FASD diagnosis meant that existing and evolving neurodevelopmental pathways were better placed than specialised clinics to meet the needs of these children.

Scottish initiatives to reduce the impact of alcohol exposure during pregnancy

Considering that we have limited information on how many women might drink during pregnancy, and at what level, asking about alcohol in antenatal care is important. This includes enabling women to talk about the use of alcohol, tobacco, or other substances. Appropriate and timely support for those who need it in relation to substance use is therefore vital and research from across Scotland has shown that finding the right way to initiate these conversations can be a challenge. However, developing services that facilitate time to build a trusting relationship between women and midwives helps with having open and non-judgemental conversations about alcohol.

Over the last decade, Scotland has worked hard on reducing alcohol harm. Initiatives such as the nationwide Alcohol Brief Intervention (ABI) programme, minimum unit pricing (MUP), and restrictions on advertisements and promotions of alcohol have been introduced. In the latest policy initiative, the Alcohol Framework 2018: Preventing Harm set out commitments to support FASD efforts through raising awareness of the risks associated with alcohol use during pregnancy and funding of services to help affected individuals.

Since 2014, the Scottish Government has funded the Fetal Alcohol Advisory and Support Team (FAAST), which provides consultation, training and support to practitioners working with individuals with FASD across Scotland. While this is currently the only service in Scotland specifically dedicated to the implementation of the SIGN Guideline for children and young people exposed prenatally to alcohol (SIGN 156), the team has extended its remit to ensuring support is available to practitioners providing lifelong support. Due to the increased need for training, consultation and research in FASD, the FAAS Team is moving from its host health board, NHS Ayrshire and Arran, to the University of Edinburgh School of Health in Social Science. The aim is to facilitate research, improve access to accredited courses in FASD, and provide consultation to support service development in Scotland. The Team works in close partnership with the Scottish Government-funded FASD Hub Scotland, hosted by Adoption UK, to improve outcomes for those directly affected by FASD.

There has been a huge amount of success in recent years and UK researchers, practitioners and advocates are working hard to progress this field. In the last few years, Scotland launched the SIGN guidelines for FASD and in England the NICE Quality Standards on FASD were under consultation, however were delayed by Covid. Nonetheless, these are good examples of how the pieces of the puzzle to preventing and supporting this condition for those affected and those who care for individuals with FASD.

While funded research studies are limited in the UK, there has been some success at the University of Salford. Funded by Greater Manchester Combined Authority (GMCA) Salford’s team and partners are undertaking the first active case ascertainment study on the prevalence of FASD. With funding from the Medical Research Council (MRC), the work also includes support for families of children with FASD. Wider prevention work in Greater Manchester includes a wide-reaching prevention campaign including training of health professionals and an information campaign. A prevention project has also been funded by the National Institute for Health Research (NIHR), led by University of Hull, focusing on a practice-based intervention to implement alcohol pathways in antenatal care. In Oxford and Brighton, development of 3D facial recognition for FASD is receiving funding through the US National Institute on Alcohol Abuse and Addiction (NIAAA) and Birmingham City University has funded a PhD studentship to explore experiences of adults living with FASD.

These recent developments across the UK show promise for the future of research into FASD and the prevention of FASD. We hope that in 2021 the attendance list for the third UK FASD Research Collaboration meeting will further grow, and we will continue to foster a community of research in partnership with families affected by FASD. If you are interested in being involved in the UK FASD Research Collaboration, please contact us at This email address is being protected from spambots. You need JavaScript enabled to view it.

Acknowledgments: Dr Lisa Schölin would like to acknowledge the UK FASD Research Collaboration, and in particular acknowledge input to / review of this blog post from Jennifer Shields, Raja Mukherjee and Penny Cook.