Understanding Alcohol in the Pandemic 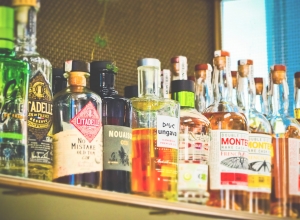 In the third week of March 2020 I went to the supermarket at the height of the pasta, paracetamol and toilet paper rush.

In front of me were a couple of men in their early 30s. They seemed unfamiliar with the checkout routine. They had a trolley of what looked like a big family shop. The checkout operator took back two of the four boxes of muesli explaining there was a limit of two items per customer. The customers pointed to their six or so bottles of wine and said “But cereal is healthy, wine is not.” The operator agreed it was illogical, but those were the rules and alcohol wasn’t part of the restriction. They shrugged and got on with their day. The man behind me in the queue was buying several litres of vodka (and nothing else).

The checkout operator then told me the past two weeks had been very busy and the store had taken as much money as they had in the run up to Christmas, which is usually their busiest period, and increased alcohol sales had been part of that.

For alcohol sales, any change in sales in stores has to be seen in the context of the closure of pubs and restaurants in Scotland from the 23rd March until the 15th July. The capacity of on trade premises remains much reduced.

Public Health Scotland analyses alcohol sales data from market research companies for the regular MESAS reports. For 2019 PHS estimated that 73% of alcohol was sold in the off trade. This balance hasn’t changed much in the past 5 years, but Scottish drinking locations have changed considerably over a generation. Until the mid 1990s, the majority of consumption was in bars and restaurants.

Off trade sales would need to increase by around 35% to compensate for the on trade sales which ended with lockdown. Has that happened? Ideally, there would be a single reliable up to date source of alcohol sales patterns in the public domain to answer that question, but there isn’t. Various estimates from retailers and market research companies were reported, some describing sales volumes, some sales values. Kantar, one of the leading market research companies, estimated a 20% increase in value sales in April. In mid July, Nielsen, another market research company, reported that in the 17 weeks of lockdown to that point, 1.3bn litres of alcohol had been consumed compared to 2bn litres in the on and off trade for the same period in 2019, a reduction of around 35% in total alcohol volumes. There may be changes in the types of alcohol consumed, for instance a shift from beer, still the dominant pub drink, to wine and spirits which tend to be preferred at home, but even with this caveat, it looks likely that, overall, alcohol consumption in the UK, including Scotland, has fallen during the pandemic because the fall in pub sales has been greater than the increase in off sales. In time further research, including excise duty receipts will give a clearer picture.

Other countries have better monitoring of alcohol sales. Kalle Dramstadt, Head of European Policy at IOGT-NTO, the Swedish NGO, has reported that alcohol sales across all sectors, including personal imports fell in Sweden by 7% in March and April 2020. This is despite bars and restaurants remaining open in Sweden, though with restrictions.

Within the overall population trends, different groups may respond differently, and for alcohol and health the response of the heaviest drinkers is of particular interest. A survey conducted by Alcohol Focus Scotland and Alcohol Change UK reported that while similar proportions of the population increased and decreased their drinking during lockdown, it was the heavier drinkers who tended to drink more and the lighter drinkers to reduce or stop drinking. While many of those drinking more said this was to manage stress, a common experience was that health, sleep and energy levels declined as drinking increased.

Other measures of alcohol harm such as the numbers seeking help for alcohol problems or admitted to hospital have been affected by the pandemic. Many alcohol services were unable to operate and SHAAP developed self management guidance to try to mitigate the effects of this. The functioning of hospitals in Scotland, where there are typically more that 100 admissions a day for alcohol related reasons, was severely disrupted. Clinicians were concerned that people with symptoms of liver disease were not contacting health services, perhaps out of concern of burdening the system, and were being assessed later in the course of their illness. The pattern of trauma harm seemed to change from younger people involved in alcohol related street violence to older people falling at home.

Putting together the puzzle of the impact of the COVID 19 pandemic on alcohol consumption and harm in Scotland is complex. In the short term, it looks likely that overall consumption has fallen and this usually means a fall in measures of health harm. If there has been a substantial rise in the consumption of heavy drinkers, who are particularly at risk, this consumption-harm relationship may not apply and this will be an important research topic in months and years to come.

Approaches to the regulation of alcohol differed in different countries. South Africa’s decision to stop alcohol sales in all settings to reduce alcohol related demands on public services during the early phase of the pandemic attracted much interest. In the UK while on-premises sales effectively ceased, sales in stores were not restricted. After a few days of uncertainty post lockdown, off licences were designated as essential businesses by the UK Government. This decision applied to stand-alone alcohol stores, but supermarkets, who are estimated to sell more than two thirds of alcohol in the UK, were selling alcohol anyway and there was no indication at any stage that the major stores would be limited in their alcohol sales. In contrast to many other items which they decided to ration for a period, retailers appeared to be confident that alcohol supply chains were able to continue to keep the shelves stocked. Is this a reflection of the importance of alcohol to the supermarkets’ business model? Alcohol has been identified as a product that is particularly likely to be used as loss leader, to “drive footfall” as the retailers put it. It wouldn’t be a surprise if alcohol was prioritised by the retail system, producers, distributors and retailers, to ensure the shelves are always stocked.

If the pandemic leads to economic recession, this will have an impact on alcohol harm. The historical pattern in the UK is of alcohol consumption falling during periods of recession. A pioneering study by SHAAP co-founder Bruce Ritson and others in the 1980s, showed that heavy drinkers responded to an increase in alcohol price at a time of rising unemployment by considerably reducing their consumption. In general, recession and poverty are bad for health, but the affordability of alcohol is a key determinant of levels of harm and there may be significant changes ahead in the balance of alcohol prices and incomes.

While academics and advocates were considering the impact of lockdown, working with limited information, there was an intriguing contribution from an unexpected source, the Bank of England. Bank Underground, a blog run by Bank employees, summarised a report from an economics think tank, the Centre for Economic Policy Research, publishing “near real time” data from 8 million transactions by 34,000 users of a money management app called Money Dashboard. The speed with which this information became available was impressive and there will be other data sources available to industry such as loyalty cards which allow tracking of individual purchasing.

In the 2010 global alcohol strategy, the WHO called for the alcohol industry to share data so that sales and consumption patterns could be better understood, but over the past decade, there has been little, if any progress. The evaluation of the impact of Minimum Unit Price on the drinks industry in Scotland has been hampered by the refusal of the discount retailers, a key and growing part of the low cost alcohol market, to be interviewed for the evaluation.

In their 2018 framework for prevention alcohol harm the Scottish Government indicated their sympathy to calls, from SHAAP and others, for detailed, real time sales data to be made available to inform alcohol policy. The COVID-19 pandemic has led to considerable speculation about the impact on levels and patterns of alcohol sales and consumption. These changes will be part of the complex impact of the pandemic and lockdown on health in Scotland. If Scotland is to maintain a focus on health improvement and particularly on tackling health inequalities, good data is essential. The experience of the past 6 months has highlighted the need for a national body with the authority to mandate the provision of comprehensive alcohol sales figures.